What is Transcranial Magnetic Stimulation? 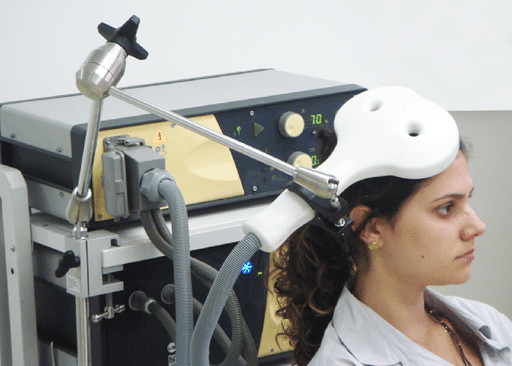 Transcranial Magnetic Stimulation (TMS) is a neuromodulation technique whereby the polarisation of neurons is induced by an electromagnetically generated electric field across the scalp; ion movement within the brain occurs without electrical current flowing across the skull. This is differentiated from similar techniques, such as Transcranial Direct Current Stimulation (tDCS), which uses electrodes placed on the scalp.

The parameters of the electromagnetic field as set on a TMS device determine the neuromodulatory effect. TMS is capable of producing Long-term Potentiation
(LTP), and Long-term Depression (LTD) like effects, which persist beyond the duration of TMS application (Huerta & Volpe, 2009). This enables TMS to be a viable treatment modality for some neuropathologies, including depression, tinnitus, PTSD, and stroke.

Research into aphasia treatment have demonstrated less consistent benefit. In some studies, TMS has shown to be inferior to intensive speech therapy. Heikkinen et al (2019) found no difference between sham and TMS alone in chronic aphasia patients, but similar significant improvements in both groups after undergoing Intensive Action Language Therapy.

My Rehab Team has a special interest in neurological conditions. We are an interdisciplinary team with professionals including physiotherapist, occupational therapist, speech pathologist, psychologist, podiatrist, exercise physiologist, dietitian and therapy assistants